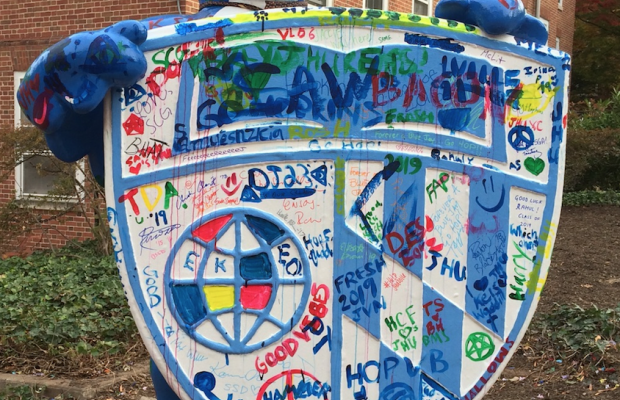 This weekend’s unveiling of the Jay the Blue Jay statue placed outside the FFC, has received mixed opinions, from mild nausea to flu-like symptoms to statements calling the art installment, “the worst thing to happen to Western culture since the burning of the Library of Alexandria.”

A recent report by prominent anti-statue think-tank “Jay, Go Away” reports that the statue “has done more damage to Baltimore property value than anything else in recent years.” Many have blamed reactions such as these on the statue’s general aesthetic unpleasantness. Others believe a supernatural force is to blame.

A group of students have been observed performing certain rituals about the statue. They have been seen speaking in tongues, flapping their arms, and squawking like birds. The most devout members of the group have been known to copy the words scrawled on the statue onto their bodies, words that the group believes are holy psalms, like “Go JHU” and “Nick sux.”

Nicholas Sevoit, a senior writing seminars major and devout worshipper of the statue said, “I used to be a Jesuit, but after seeing the power of this statue, I’m officially a Jaysuit!”

The Office of Multicultural Affairs has urged acceptance of this newly founded cult, but many students on campus have criticized the group for being one of the main reasons that the statue is remaining on campus, despite its generally negative reception.

The SGA, accepting responsibility for the disaster, has proposed an alternative installment; a glass box with a dead bird inside, saying “it would be drastically less nauseating.”