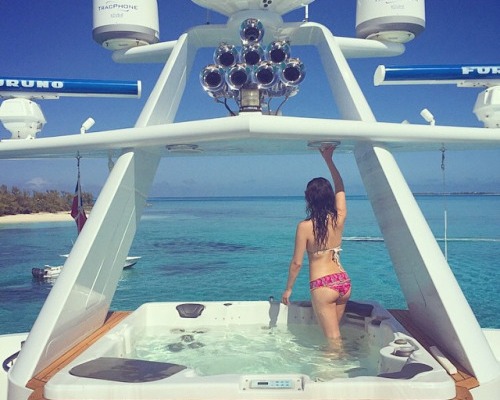 Upon investigation of junior Veronica Wayworth’s lavish vacation Instagrams, it has come into question how she afforded her vacation at St. Bart’s. While speculation states that she paid for her hotel stay with her parents’ money, Wayworth is steadfast in her claims that she paid for the vacation herself.

“Spending a week in the largest presidential suite in the most expensive resort on St. Bart’s was something I earned for myself – I didn’t spend any of Daddy’s money on it. Sure, I spent plenty of Daddy’s money on daily seafood brunches, brand new Louis Vuitton suitcases, a helicopter trip to Mommy’s private island, and the finest balding Norwegian male escorts out there, but the hotel room – that was all me,” Wayworth stated.

“I’m sick of these poor people complaining about how extravagant my spring break was. But I earned it, and I had to make so many sacrifices to be able to afford it. To save money, I stopped buying Gucci and bought Valentino instead. I only have lobster once a week now. And to afford those balding Norwegian male escorts, for a while, I had to settle for the Danish. Sure, they’re all Scandinavian, but Danish are a little freaky – not in a good way.”

Upon hearing that several of her classmates had opted to stay at home to save money, Wayworth commented,

“Ugh. Can’t even imagine. Staying at home on my parents’ expansive New Jersey estate with our private chef and private swimming pool and private golf course. You couldn’t pay me to do that.”​