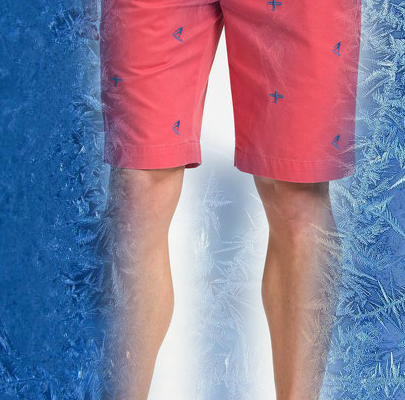 Barnaby was defiant following his defrosting. “First of all, it’s not fucking ‘salmon.’ It’s called Nantucket red.” He continued, “Being preppy, dressing like I did when I froze – it isn’t just a trend. It is a lifestyle and I refuse to change. How else are people supposed to know I’m from a wealthy town in New England and attended an elite private school?”

Barnaby also took a strong stance against those who suggested he dress appropriately for the weather. “To my critics, I say whatever. This is my lifestyle; you couldn’t honestly expect me not to wear a Lacoste polo when playing tennis with my old friends from prep school, and you can’t expect me to not wear Nantucket red shorts whenever I want. I don’t expect you to understand; half of you haven’t even been to a fucking regatta.”

Rescuers are advising Barnaby and other students on ways to stay warm this winter.

“This is the third WASP we’ve found shivering in a Brooks Brothers polo this month.” To prevent further incidents, it is recommended that students wear warmer clothing and more layers. They added, “J. Crew has an excellent winter line.”

At press time, Barnaby was reportedly heading to the mailroom to pick up a shipment of pastel Vineyard Vines button downs in order to dress more appropriately for the weather. On this development, Barnaby stated, “Of course they’re monogrammed. I’m not a fucking pleb.”​